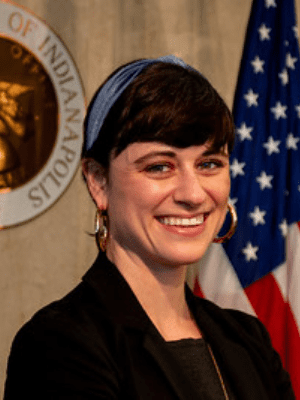 Scarlett Andrews serves as the Director of the Department of Metropolitan Development (DMD) for the City of Indianapolis. Prior to this role, she spent four years in the Office of Mayor Joe Hogsett, most recently as the Director of Community and Economic Development. Scarlett has led negotiations and financing of real estate economic development transactions, including the GM Stamping Plant site, the sixth expansion of the Indiana Convention Center at Pan Am Plaza, affordable housing and mixed-income residential developments, mixed use office and commercial developments, and brownfield redevelopment projects. During the COVID-19 crisis, she had the privilege to work closely with the mayor and civic organizations like the Indy Chamber, Visit Indy, the CIB and the Indianapolis Arts Council to launch and administer small business support programs, including the Restart PPE grants, the HELP grant program, Winter Ready grants, the Music Cities Strategy Recovery Program, and the COVID-19 Relief Fund for arts and cultural organizations. In addition to her role as Commissioner, Scarlett also serves as the Executive Director of the Indianapolis CDE and is a member of the Tourism Tomorrow board and the United Way of Central Indiana’s Capital Impact Fund board.

Scarlett moved to Indianapolis from New Orleans in 2015 and joined the mayor’s team as a project manager in 2017, after spending her first year and a half in Indianapolis working in community development and organizing for the South Indy Quality of Life Plan, in partnership with the University of Indianapolis, Fifth Third Bank, the Indianapolis Neighborhood Housing Partnership (INHP) and Big Car Collaborative. Originally from Tennessee, Scarlett earned a BA in International Studies and Spanish from the University of Mississippi and holds an MA in Latin American Studies from Tulane University.